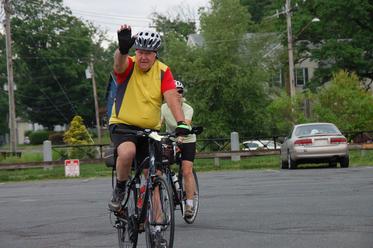 One of the sure signs of Spring are bicyclists on the roadways. They have anxiously awaited the rising temperatures and longer days to pursue their passion, being outdoors and burning calories astride their beloved Treks, Giants, Specialized or other exotic road bikes. In April one group of avid cyclists, the Springfield Cyclonauts, is kicking off their 52nd season in the Pioneer Valley with a full slate of Saturday, Sunday and Wednesday rides of 25 to 50 miles in length. All rides are recreational, some in the 15 to 20 mph range, others slower. Many include a breakfast or lunch stop and range from Northern Connecticut to Southern Vermont and from the Worcester area to the Berkshires.
All cyclists are welcome to join our club rides. Club President Betty Siwinski says cyclists are welcome to try us out before deciding to join our club. Schedules and ride descriptions can be found on our website at www.cyclonauts.com. The only requirements are to have a bike in good working order, a bike helmet and a love of cycling. We hope to see you on a ride soon.

To the Editor:​
I am a 24-year resident of Belchertown and I have always loved living and working in this town mostly due the friendliness, courtesy, and generosity of the people who live here. I was therefore extremely disappointed by the behavior of a motorist this past Wednesday. I belong to a bicycle club in which various members of the club take turns leading rides in their communities. Last Wednesday I was leading a ride in Belchertown, all members were riding single file as far to the side of the road as possible, when a women passing us in a car yelled out “get off of my road.”

If I had been the only one she yelled at, I wouldn’t be writing this letter, but she yelled this at several of our club members as she passed them. Apparently her impatience was due to riding behind a school bus that had slowed down and waited to pass safely as cars were coming from the other direction. I would like her to know however that not only do cyclists have a right to the road legally; they also buy gasoline and pay property taxes. Also, cyclists are good business. We all had breakfast at Kristina’s Café that morning and at Almeida’s the previous Saturday.

Our club brings people to town that would not ordinarily be here and many times they return on their own once they discover how awesome Belchertown is, especially our restaurants. I was somewhat embarrassed by her behavior because I know that Belchertown residents are better than this. We have mostly experienced courtesy from drivers in this town. As most of us realize, cyclists have a legal right to ride on our local roads and they also support our local businesses.
Respectfully,
Elizabeth Siwinski
Belchertown, MA

For Some Seniors, Staying Fit Is As Easy As Riding A Bicycle
by Andrea Bugbee
Special to Healthy Life
Reprinted with permission from The Recorder of Greenfield, MA, and Andrea Bugbee, author

Ray Bourbeau of Indian Orchard gives a wave as he leads a 25 mile bicycling
outing beginning in Easthampton. An enthusiastic cyclist, it is not unusual for
Bourbeau, 69, to pedal over 100 miles in just a few days.
It’s 8 a.m. on a Wednesday morning and one group of customers at the Easthampton Diner really stands out. That’s because nearly everyone at their table is gray-haired, laughing, and wearing neon spandex.

This brightly-colored breakfast bunch represents the mid-week contingent of Springfield’s Cyclonauts Bicycle Club, a recreational cycling club that has rolled throughout the Pioneer Valley since 1965. For a paltry $10 annual fee, this member-managed group offers organized bicycle outings on Wednesdays, Saturdays and Sundays. Some weekend rides travel a full 45 miles and zip along at 18 miles per hour. Other rides are less challenging. All offer an easy, inexpensive venue for exercise, sightseeing and companionable fun.
But the Wednesday Cyclonauts have a character of their own. They stand out because a majority of their regular riders are retirees in their mid 60s and early 70s. “It’s not that the other riders are necessarily younger, they’re just faster,” laughed 74-year-old Feeding Hills resident, Elsa Rosenak, while enjoying the camaraderie of the group’s traditional pre-ride breakfast.
“We’re the old contenders, so we usually do 25 to 30 miles for a ride,” explained Ray Bourbeau, a retired Sears service technician from Indian Orchard who volunteers to lead many of the Wednesday rides. Bourbeau often pedals the weekend rides as well, and announced that he had just logged 111 miles over three days. He’s 69.
Don “Mountain Man” Maynard also frequents both the Wednesday and weekend rides. But this athletic 81-year-old from East Longmeadow is a true gentleman. He uses a heavy old mountain bike for the Wednesday rides. That’s so he doesn’t leave the rest of the group too far behind.

preparations nearby.
The Wednesday Cyclonauts bill their weekly outings as “relaxed.” Yet, their pace is often 12 to 15 mph, and their lengthy rides are usually complete in three hours or less. They always encourage newcomers, but they do caution neophytes to work up to the group’s endurance and speed before joining.

“You don’t have to be a good rider, you just have to want to do it,” said Rosenak, a former runner who originally started out cycling just five miles at a time. “The rail trail is safe, and it’s a good place for a beginner.”
The group had other tips for getting started. Cycle with a friend, they said, and start early in the season so there’s time to build up to longer rides. They also recommended reviewing essential bicycle safety rules by following the link under “More about Us” at www.cyclonauts.com.
But newcomers who are ready to join an organized Cyclonauts ride needn’t feel daunted. “Whoever’s leading the group ride is respectful of everyone on the ride. We don’t leave anyone behind,” Rosenak assured. “That’s really nice. It makes it not so intimidating. Someone will stick with you and get you up that hill to where you need to go.”
For these Wednesday regulars, the benefits of bicycling are both straightforward and abundant. For example, 68-year-old Claire Gingras of Belchertown noted, “It’s great exercise and good friends, and I think bicycling is much more forgiving on your joints.” Gingras conquered her first 100-mile ride in the mid 1960s. Last year, her top ride was 67 miles – a slight disappointment to her, but hugely impressive to anyone younger and less athletic.
Chuck Allsop, a 66-year-old retired construction worker from Springfield, suggested some practical advantages of the Cyclonaut rides. “Some people drive a little fast, but when you ride with a group of 10 or 15 people, most drivers see you. They give you a little room. That’s not always the case, you know?”
“Plus,” Allsop observed, “everybody wants to see everybody show up, so you’ve got your inspiration. And you feel better after. You got your exercise.”
“You don’t have to be a good rider, you just have to want to do it.” - Elsa Rosenak, 74 year-old cyclist from Feeding Hills.
“I like the people,” nodded Hampden resident Mike Cronin.
“I like the women,” grinned Maynard, who bikes in jean shorts and has shoulder length curls.
“You can bike and have a good time with people without smoking and drinking,” Bourbeau added
“Which is why I was forced to give up softball,” Cronin teased. “By the fourth inning, it was a disaster.”
Bourbeau cited still another benefit to bicycling: “You see things you’d never see from a car.” At this, Gingras opened up her cell phone to show pictures of the Wednesday group at the Windsor Dam in Belchertown, with the beautiful Quabbin Reservoir glimmering in the background. She also had pictures of a large snapping turtle sunning itself on their route. Group members told about the bear, the fox, the snakes, and the dog wearing goggles they have seen on their accumulated two-wheeled travels.
Local rides leave from an interesting variety of locations, including Brimfield, Amherst, Brookfield and Ware. Benefit rides have taken participants as far away as Lake George, Mount Washington, Maine and Vermont. Still other outings are more like mini vacations. In June and September, for example, the Cyclonauts enjoy their annual trip to Cape Cod, where bike paths are abundant and mid-week accommodations at the Hunter’s Green Motel in West Yarmouth were only $30 a night.
Bourbeau organizes the Cape Cod excursion and Rosenak remarked, “Ray makes it a pleasure trip; not just put your head down and ride.”  Evenings are full of fun, food and friends. Then, during the day, non-cycling spouses find their own entertainment while the Cyclonauts strap on their helmets and view the ocean and dunes from aboard their bicycles.
These Wednesday cyclists look and act more like healthy, energetic grandparents than fitness fanatics. They are athletes who hike and cross-country ski off season, and they glow with a vitality of good health, good friends and a “why not?” attitude. Because of cycling, they said, each has been places and met people they otherwise would not.
For a complete schedule of the Cyclonauts’ Wednesday and other events, interested cyclists can peruse www.cyclonauts.com. In the meantime, Bourbeau had one last crumb of encouragement for any adult tempted to give bicycling a whir. “You can get better at anything you try. You just have to start,” he observed.
Then he told the story of fellow Cyclonaut Vinnie Mandolini of Hampden. “Vinnie loves to ride,” Bourbeau remarked. “Last June, this guy has logged like 3,500 miles over a couple of months. And he’s 72. He improved, you know?”

The content of this website is for the use of Cyclonauts Bicycle Club members only and may not be used or
reproduced in any form without the express, written consent of the Club President. 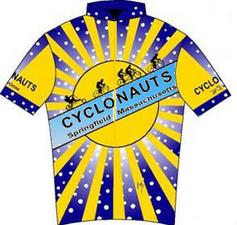 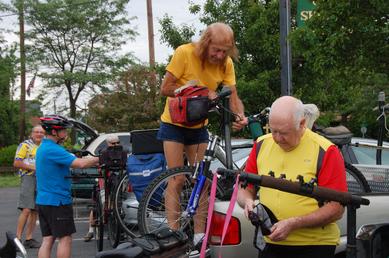